During the late 1800s, cattle grazed in the area surrounded by the McDowell Mountains to the east and Camelback Mountain to the south. In the 1880’s, the Rio Verde Canal Company turned this open grazing area into irrigated farmland. In 1889, the Rio Verde Canal Company sent three surveyors to this area who were so taken by the beauty and tranquility of the desert landscape that they named this area Paradise Valley.

Settlement in Paradise Valley did not begin in earnest until post World War II. Paradise Valley, which is in Maricopa County, was a rural residential area with few commercial entities. Though the homes were modest in size and style, they were on large parcels of land, usually one to five acres.

In the late 1950s, Phoenix and Scottsdale were looking to expand their respective boundaries. Residents who lived in Paradise Valley area feared that they would lose the rural lifestyle they had become accustomed to and would soon be swallowed up by Phoenix or Scottsdale, and eventually subdivisions, shopping centers, new zoning laws and property taxes would be a commonality. These concerned residents formed a “Citizens Committee for the Incorporation of The Town of Paradise Valley, Arizona,” who set out with petitions urging residents to join them in their attempt to incorporate Paradise Valley. The residents' main goals were to keep zoning to a one house per acre minimum; to keep the area entirely residential; and to keep government regulation to a minimum. In April 1961, the Citizens Committee for Incorporation presented their petition to the Maricopa County Board of Supervisors. On May 24, 1961, incorporation was granted and the Town of Paradise Valley was established.

With a population of approximately 2,000, the first Town Council was formed. During the early years of the Town’s history, the Council spent most of its time establishing the Planning and Zoning Commission, the Board of Adjustment, redefining zoning ordinances, and annexing property. By 1968, the boundaries of the Town of Paradise Valley were pretty well set, with only a few scattered county islands and a handful of neighborhoods adjacent to the Town boundaries that would eventually be annexed. In 2000, with a population over 13,000, only two county islands remain - the community of Clearwater Hills west of Tatum Boulevard and the Franciscan Renewal Center on Lincoln Drive.

Throughout the Town’s 50-plus-year history, the residents have striven to preserve the Town’s original mission - to maintain a residential community in a quiet and country-like setting with little government intervention. 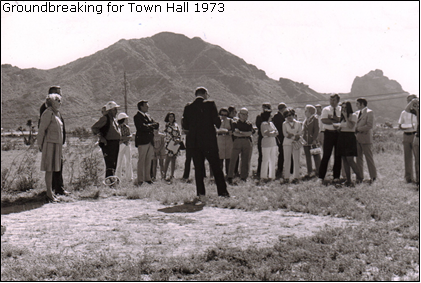